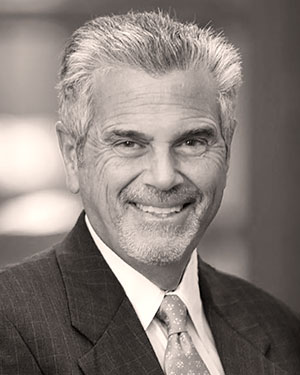 During that time, he has overseen the theatre’s development from a semi-professional, partly-student organization to a fully independent company, complete with a permanent endowment and independent Board of Directors.

Mr. Goodman is a partner in the law firm of Goodman & Donohue, where he specializes in products liability defense work, general liability work and insurance law. He has been named a Super Lawyer from 2009 to the present in the field of general litigation.

Mr. Goodman is also general counsel to the National Association of Public Insurance Adjusters and was honored as its 2005 person of the year.

His daughter Fallon is a graduate of Bryn Mawr School, where she starred in A Funny Thing Happened on the Way to the Forum. She was also featured as Fleta in Young Vic's Iolanthe (2010). His wife Laurie holds a Masters of Fine Arts in Children’s Literature from the Vermont College of Fine Arts. 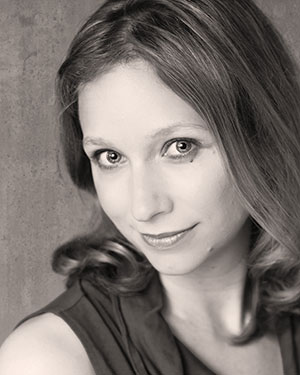 Catrin Rowenna Davies, director, mezzo-soprano, and arts administrator, has been an opera professional since 2001. Described by the Baltimore Sun as having “bright vocalism and flawless diction,” she has established herself as a presence both on and off the operatic stage. Born in Washington, DC, and possessing British citizenship, Ms. Davies has lived and performed in the United States, Canada, and the UK.

A self-identifying G&S fanatic, Ms. Davies is thrilled to be the Artistic Director of the Young Victorian Theatre Company, after a long association with group: 10 roles and 1 assistant directorship over the course of almost 2 decades. In addition to Young Vic, she been in staged productions of almost all of the operettas (including The Grand Duke), has performed at the International Festival of Gilbert & Sullivan in Buxton, England, and has lectured on G&S for Elderhostel/Road Scholar.

Ms. Davies started her directing career in 2007 by assisting director Garnett Bruce in Peabody Opera’s Les Contes d’Hoffmann. That same year, she directed the Old Maid and the Thief for Harbor Opera at the Walters Art Museum, and assistant directed HMS Pinafore at the Young Victorian Theatre Company. After this auspicious beginning, she embarked on a successful regional career. Most recently, she directed Hansel and Gretel for Bel Cantanti. She was also selected to be a part of the inaugural class of the Directors' Studio at the Shakespeare Theatre Company, under the mentorship of Michael Kahn. Other highlights include: directing The Three Little Pigs, the educational outreach show for Opera Delaware, and assistant directing the world premiere of Bornfield's Camelot Requiem. At Lyric Opera Baltimore, she directed Jake Heggie’s At the Statue of Venus, and also directed two outreach programs. At Live Arts Maryland, she has directed South Pacific, Man of La Mancha,The Fantasticks, Fiddler on the Roof, Oklahoma, Secret Garden, Kiss Me Kate, and HMS Pinafore, the latter for which she received the following accolade from The Capital: “The staging and directing was handled absolutely brilliantly by Catrin Davies…” Ms. Davies is proud to be the resident director of Summer Garden Opera, and has directed La Traviata, Il barbiere di Siviglia, and Faust for that company.

In the academic realm, Ms. Davies has been on faculty at the Peabody Conservatory, and Towson University, and was the primary director for Peabody’s educational outreach opera for schools over the past 7 years. Ms. Davies holds an honors degree in history from McGill University, a Master's degree in Women's Studies from Oxford University, and graduate diplomas from the Royal Welsh College of Music and Drama, and the Peabody Conservatory. 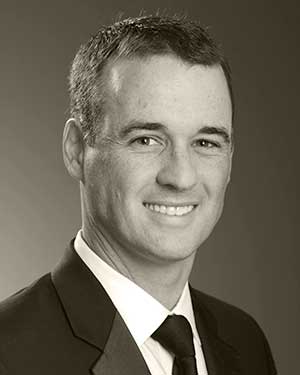 Dr. Christopher M. Cicconi is starting his first year as the new Music Director and Conductor for the Young Victorian Theatre Company.

Dr. Cicconi is Director of Bands and Orchestras and Assistant Professor of Music Education at Towson University. He is conductor of the Towson University Symphonic Band and Symphony Orchestra; and he teaches courses in conducting and methods of teaching instrumental music in secondary education.

Prior to his arrival in Maryland, he earned a Doctoral of Musical Arts Degree from the University of Miami, where he was awarded a Henry Mancini Fellowship.

As an orchestra conductor, Cicconi has held positions and guest conducting appointments with orchestras in the United States, Argentina, and China. Most recently he served as associate conductor with the Broward Symphony Orchestra, the Ars Flores Symphony Orchestra, and the Walenstein Youth Symphony.